October 5, 2022
A new film intended to get out the vote for pro-choice candidates this Roe-vember 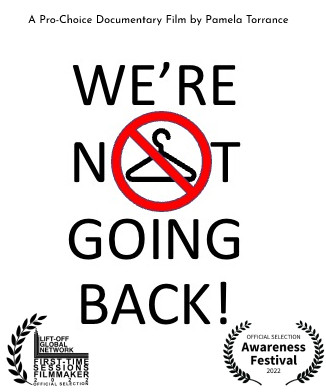 WNGB Poster
WE'RE NOT GOING BACK! Film Poster with Laurels

In the wake of the SCOTUS Dobbs decision, which overturned Roe v Wade, WE'RE NOT GOING BACK! is a feature documentary that seeks to provide awareness and help educate younger generations who never had to contemplate what life is like without constitutional reproductive/abortion protections as the law of the land.

Topics included in the film: Pre-Roe era; origins of Roe v Wade legislation; religious, medical, rape/abuse situations; addiction; race; gender; adoption, etc. The film also touches on other rights under threat now that the right to privacy has been dismantled and includes a strong call to action to get out the vote for pro-choice candidates at all levels of government.

Click here for a preview of the film: WE'RE NOT GOING BACK! Trailer

Filmmaker Pamela Torrance is thrilled to have her first documentary be a part of this year's Awareness Film Festival in Los Angeles with both an in-person screening and online platform for accessibility in red (and blue) states beginning on Oct. 16.  Just in time for the Roe-vember election.

Pamela will also participate in the Changing the World One Vote at a Time panel discussion earlier in the day on the 16th at 11:00 a.m. PDT.

For additional information and updates, please see the film's website, WE'RE NOT GOING BACK!