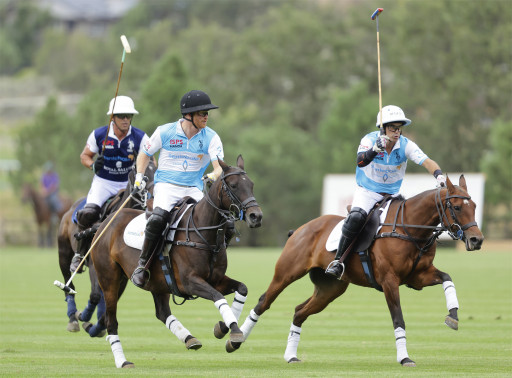 The event took place on Aug. 25 at Aspen Valley Polo Club in Carbondale, Colorado. U.S. Polo Assn. provided custom performance jerseys for all teams and umpires and also distributed co-branded caps for all attendees to take home as a memory from the event. The global lifestyle brand also provided field signage and promoted the event through digital and social media.

"As the Official Apparel Partner and Team Sponsor of the 2022 Sentebale ISPS Handa Polo Cup, U.S. Polo Assn. aims to expand global philanthropic endeavors for our brand and the sport, as well as shine a light on the meaningful efforts behind the Sentebale mission," said J. Michael Prince, President and CEO of USPA Global Licensing, which manages the multi-billion-dollar U.S. Polo Assn. brand.

The annual polo event raises vital funds for Sentebale, an organization that was co-founded in 2006 by Prince Harry, The Duke of Sussex, and Prince Seeiso to support Sentebale's vital work with children and young people in southern Africa whose lives have been affected by extreme poverty, inequality, HIV/AIDS and recently COVID-19. This year's event included Sentebale's co-founding patron, Prince Harry, The Duke of Sussex, who showed great athleticism and leadership while playing on the Sentebale team.

"The Sentebale ISPS Handa Polo Cup contributes vital funds every year, helping Sentebale to continue our lifesaving and empowering work in Lesotho and Botswana. We are so grateful to U.S. Polo Assn. and all our sponsors for their unwavering support. The power and excitement of polo is enabling vulnerable children and young people, living with and affected by poverty and HIV/AIDS, to live more healthy and hopeful lives," said Richard Miller, CEO of Sentebale.

Fans enjoyed the mountainous views and Aspen temperatures watching the thrilling game. In the end, the Cup was won by Team Sentebale, with a score of 3-1.

Prince added, "I would like to thank the beautiful Aspen Valley Polo Club for hosting this year's event as well as Team U.S. Polo Assn. for representing us on the polo field for such an important cause. We are honored to continue our support of Sentebale again this year in order to positively impact communities around the world through the sport of polo."

U.S. Polo Assn. is the official brand of the United States Polo Association (USPA), the nonprofit governing body for the sport of polo in the United States and one of the oldest sports governing bodies, having been founded in 1890. With a multi-billion-dollar global footprint and worldwide distribution through some 1,200 U.S. Polo Assn. retail stores and thousands of department stores as well as sporting goods channels, independent retailers and e-commerce, U.S. Polo Assn. offers apparel for men, women, and children, as well as accessories and footwear in 190 countries worldwide. Today, U.S. Polo Assn. is ranked the 28th largest licensor in the world and within the top five sports licensors, according to License Global's 2022 list of "Top Global Licensors." Visit uspoloassnglobal.com.

USPA Global Licensing Inc. (USPAGL) is the for-profit subsidiary of the USPA and its exclusive worldwide licensor. USPAGL manages the global, multi-billion-dollar U.S. Polo Assn. brand and is the steward of the USPA's intellectual properties, providing the sport with a long-term source of revenue. Through its subsidiary, Global Polo Entertainment (GPE), USPAGL also manages Global Polo TV, the world's leading digital platform with polo and lifestyle content. In addition, USPAGL partners with ESPN and beIN Sports globally to share the sport of polo broadcasts on television and on-demand to millions of viewers around the world. For more polo content, visit globalpolo.com.

Sentebale was founded by Prince Harry, The Duke of Sussex, and Prince Seeiso in 2006. Sentebale means 'forget-me-not' in the Sesotho language, representing a pledge to remember the most vulnerable children in Southern Africa. Sentebale aims to reach children and young people living with or affected by HIV, especially the most vulnerable who are additionally challenged by issues of deprivation, exploitation, abuse or neglect. Our vision is that all children and young people in Southern Africa are empowered, healthy and resilient, and our work, in Lesotho and Botswana, enables vulnerable children and young people to thrive. Sentebale has now reached the next stage in its development with a new five-year strategy, building on the platform established in recent years whilst responding specifically to the increased needs as a result of the COVID-19 pandemic. For more information, visit www.sentebale.org. Follow on Twitter/Instagram @Sentebale and Facebook @SentebaleOfficial.